Fans can get closer than ever to the Turkish Airlines EuroLeague Final Four with the ground-breaking launch of a unique virtual reality experience for this month’s season finale in Cologne.

The Final Four VR Pass will offer unprecedented up-close access to the on-court action, bringing home the emotions of the live event like never before.

A digital control room will let fans curate their own viewing experience by choosing among 12 live feeds, including four 180-degree cameras on the backboards and in the area of the courtside seats. Users have the freedom to switch between cameras in real-time to decide which ones they watch and how they watch them.

The pass may be bought as a virtual ticket at a base price of 15€ by clicking here. A code can then be redeemed in the EuroLeagueTV VR App, available on Android, iOS and Oculus, giving full VR access to all four games of the Final Four.

Due to the inability of fans to attend the Final Four this season due to health and safety protocols surrounding the global pandemic, the Final Four VR Pass is a chance to witness the event in a whole new way.

Passes will be limited to the number of regular tickets, 14,210, that would have been sold for the Lanxess Arena under normal circumstances. The VR Pass will be offered to those fans who had bought tickets for the canceled 2020 Final Four and to current EuroLeague TV subscribers with a 50% discount.

Alex Ferrer Kristjansson, Euroleague Basketball Marketing and Communication Senior Director, said: “Since the cancellation of last season’s Final Four we have been working hard to bring our fans the best possible experience during their absence from the arenas due to the pandemic. The VR Pass will allow our fans to live the Final Four almost like a player”.

Hector Prieto, Co-Founder and CEO of YBVR, said: “It is exciting to work hand-in-hand with Euroleague Basketball in pioneering a Virtual Reality experience. The most rewarding thing is allowing devoted basketball fans to really feel the emotions of the live Final Four, experiencing the action at home as if they were courtside in Cologne.” 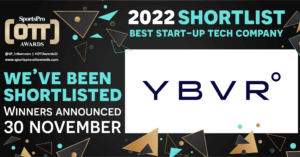 YBVR are honoured to announce that we have been shortlisted for the Best Start-Up Tech Company’ for this year’s SportsPro’s OTT Awards. This award recognises